I have traveled to a handful of places, but until Hawaii, I had never vacationed. The difference is really quite simple. Traveling is great, you experience more than words can explain while traveling, but it is physically (and sometimes emotionally) exhausting. On the other hand, vacationing is therapeutic and typically involves staying put and getting a nice tan. I’d like to say that our trip was a nice mixture of the two.

In a land where roosters overpopulate the roads like squirrels and coconut trees flourish all over the lush garden island, live approximately sixty-thousand lucky Hawaiian souls. As a graduation gifts to ourselves, Halu (my sister-in-law) and I flew straight to Lihue and began our tropical adventure. We waltzed into the rental car store with smiles ear-to-ear and after some smooth talking, we were upgraded to a convertible. We then drove straight to the Kauai Marriott Resort (aka heaven) to check-in and relax before our busy week ahead. We flew in late at night and we really couldn’t see much of anything. So the next morning we woke up to see the paradise in which we had landed. Slightly jet-lagged, I woke up at around 6am and walked straight to our balcony. I pushed away the curtains and my jaw dropped. Our room overlooked the courtyard located just steps away from the ocean. It was 75 degrees outside and at that moment I knew I never wanted to leave.

We went out for breakfast at a local diner, Tip Top to try pineapple and macadamia nut pancakes with some fresh kona coffee. I wish that there was a better way to describe how good (and cheap) that breakfast was, if you ever find yourself in Kauai, go. We then headed back to our hotel to quickly change and meet up with our friend who happened to be on the island as well. The three of us drove up to the North Shore to go snorkeling at Tunnels Beach. After snorkeling, we casually wandered through some caves and then relaxed on the beach drinking freshly chopped coconut. We then headed in town for dinner and to watch the sunset at Hanalei Pier. I have watched hundreds of sunrises and sunsets, but because of the warm tropical rainforest-esque climate in Kauai, the sunsets were breathtaking. Bright indigo and fuchsia colors painted across the sky with fluffy charcoal and white clouds. As if the sky wasn’t colorful enough, multiple rainbows stretched across the horizon that evening. 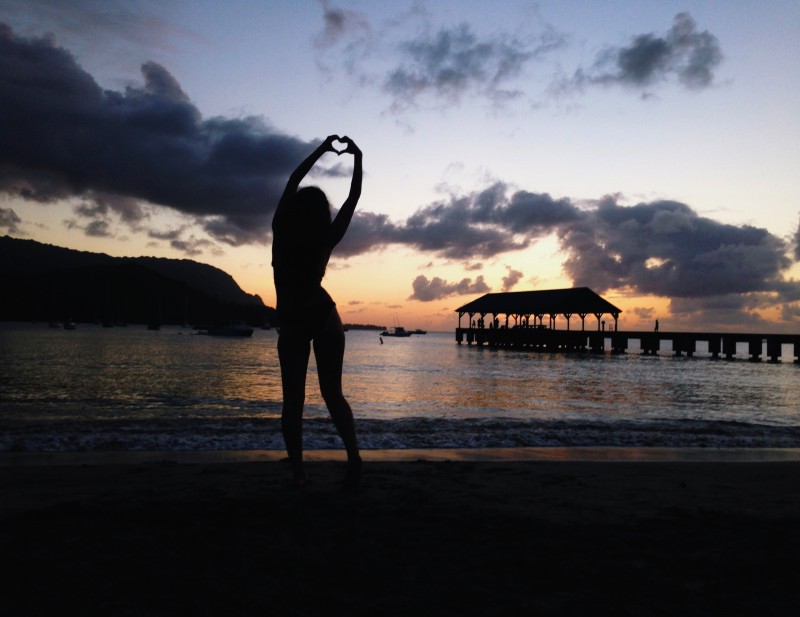 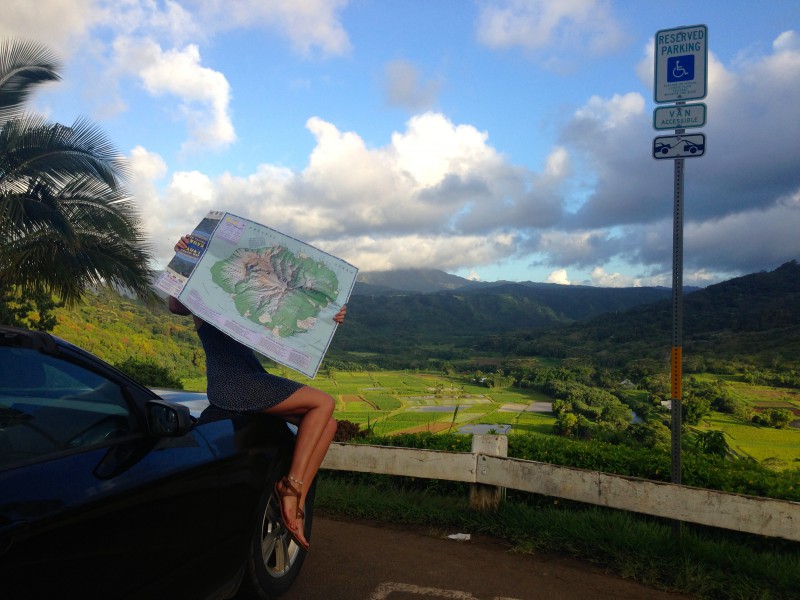 The next day Halu and I drove back up to the North Shore to continue exploring the island. Just off the main highway, is a small lookout point overlooking the Taro Fields. We stopped to take some pictures, film some skittish wild roosters, and stage some ridiculous selfies. We continued onward back to the beach to layout and relax. Just as we were about to head back to town, we decided to instead head north to the very end of the road to see what was up there. We discovered a ton of people were parked anywhere they could, all waiting with beers in hand to watch the sunset on a secluded beach. Before we could even touch the sand, we were immediately handed beers and welcomed. We made some new friends and were invited back to one of the guys’ houses for dinner after sunset. We continued our spontaneous adventure and cruised just down the road for a ridiculously delicious homemade BBQ. A few more friends showed up with a few more beers and together we shared a few more memories over a game of Kings Cup.

Up bright and early, Halu and I took a kayak tour up the Wailua River. We hiked barefoot through a mile of mud, all the way up to the waterfalls. We went swimming and quickly became friends with our tour guide, Makana. Covered in mud and still damp from the falls, the three of us headed straight to Tiki Tacos for some absurdly massive, unbelievably delicious, fresh Mahi Tacos. It’s not even fair how good the food is in Kauai and that’s coming from a Los Angeles Native. Over lunch, Makana told us about this incredible hike in Nā Pali, a beer or two later, he agreed to take us the next day. We cruised about two hours past our hotel to the other side of the island to find this place. We drove all the way to the top of the mountain, and then hiked through machete-chopped terrain to make it to the lookout. Again, words cannot explain how surreal the view was. I’ve hiked to the top of Masada in Israel to watch the sunrise, I’ve hiked along the ridges of Cinque Terre in Italy, and this – this was the most breathtaking hike I had ever done. Period. There were even some parts that were just too dangerous to trek in shoes. Without a second thought, I kicked off my sneakers and crawled barefoot along the ridge line 4,000ft above sea level. Just as I was walking back, I accidentally nudged my sneaker off the edge of the cliff, and watched my shoe tumble down the mountain. I sat there defeated and could do nothing but laugh. I proceeded to walk the rest of the hike in my socks. It was completely worth it.

The following few days flew by, we overloaded on pineapple and coconuts and spent all the time we could in the sun. We grabbed a few more poolside Mai Tai’s from our lovely waitress Cheryl and practiced yoga on the beach. Finally, for our last night, we got together with our friends that we had met earlier that week and we all got tapas and cocktails at BarAcuda. Just as we were about to head back to our hotel, one of our friends spontaneously proposed that we all go swimming at the beach just down the road. It was nearly midnight, but the ocean was warm and the sky was clear, so we figured it was the perfect way to end our trip in Kauai. We swam under the stars and I never wanted that night to end. Until next time, Mahalo Kauai.