After a quick detour to Israel, I was back in the Schengen Area. I returned to my luggage in Italy, swapped out my t-shirts for winter coats, and I was off to Belgium. At this point in my travels, I really wasn’t picky with my hostels. I typically booked a bunk within five minutes based on the reviews, I stored the addresses in my phone, and continued on with my day. When I landed in Bruxelles, I had no idea where I was going, I just followed my map and began walking. Unfortunately, I wasn’t quite ready for the unexpected wind chill that accompanied my cobblestone stroll. Upon arrival at my hostel, my ruby colored nose was frozen, my fingers were numb, and all I wanted to do was wear everything in my suitcase and sit by the fireplace. Instead, I discovered I was in the wrong hostel. As it turned out, the hostel I originally booked was being remodeled. The lobby had been painted that day, so I was expected to check-in at this hostel across town, and then find my previously booked hostel. I was handed a stack of sheets, a towel, and a paper map. I looked out the window at the chilly street and tried to fathom the idea of trekking back outside. I turned back to the American expat working at the front desk and said, “I can’t, I’m sorry, I need to stay here.”

I unpacked, eventually regained sensation in my fingertips, and proceeded with caution back down to the lobby. I stood by that same fateful window, glancing at the windswept trees, and decided that I was going to stay in for the evening. I grabbed an open table and began working. A few hours passed and I started to get hungry. The idea of the cold was still far worse than my growing hunger, so I continued to work. I eventually finished my tasks and needed to appease my appetite, so I grabbed a few equally timid travelers, and we all sprinted to town. The cool air pierced our throats like swallowing dozens of little ice needles, and the only cure was freshly deep fried comfort food. Fully frozen and slightly delusional, we stumbled across a place called Fritland. I indulged in authentic Belgium fries, drenched in homemade sauces, sizzling hot fried chicken, and washed it all down with a huge coke. My frozen arteries joyously began pumping pure oil like a newly refurbished car engine. We wobbled back to the hostel in a deep food coma and crawled into bed. 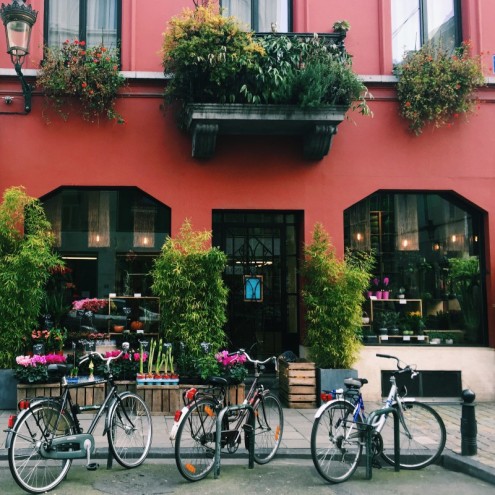 The next day, I located a walking tour and eagerly followed my tour guide throughout the historic city. We started at the Grand Place, met the Manneken Pis (and his less popular sister), and then stopped for some Belgian waffles at Leonidas. We saw massive Cathedrals, elaborate shopping districts, stopped at Parc de Bruxelles and the Place Royale, then finished the tour with a panoramic view of the city. I sat in pure amazement until my limbs gradually began to freeze to the cement steps. With the rapidly diminishing sunlight, I was forced to rush back toward the warmth of my hostel. I stopped at Exki for a quick muffin and tea before positioning myself directly in front of the lobby fireplace. At this point, it was too late to continue exploring but too early to go out for the night. Instead, I sat in the lobby making new friends, drinking beers, and sharing travel stories.

During my walking tour, we saw a bunch of collegiate-aged locals running around in decorated lab coats, completely intoxicated. Bewildered, I asked my guide what was going on. He playfully scoffed and explained that it was an odd tradition and that if I went out that night, I would see even more shenanigans. I explained this phenomenon to the other travelers at the hostel and they laughed and exclaimed, “Well what are we doing here then? Let’s go!” We got two blocks down the road before we were surrounded by hundreds of people, commercial-sized trucks were rolling down the street with drunken students hanging off of them. They’d pull over, swing open the doors, and sell alcohol straight from the truck. Police enforcement set up barricades and shut down roads for everyone to walk through. It was a complete mess. We managed to find a relatively sober-enough student to explain to us some of their traditions. I wish I could reiterate the nonsense he exclaimed, but essentially it was some type of fraternity graduation. Rather than customary graduation gowns, the locals donned white lab coats littered with graffiti. They also wore these goofy hats with sizable brims decorated in golden pins representing various achievements. Needless to say, I was a bit jealous of their obscene traditions, because they definitely sounded like a lot more fun than my graduation. After squeezing through the cramped crowds, we eventually made our way to dinner before heading out for the night. 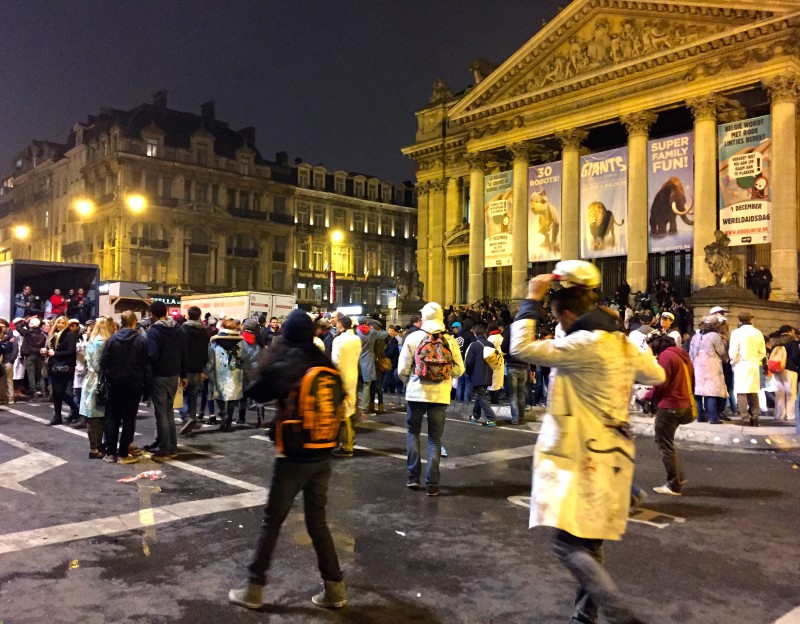 For my last day in Bruxelles, I bought a 24-hour metro pass and explored every possible landmark that I had missed the day prior. Some attractions were completely pointless and obnoxiously expensive (i.e. Mini Europe), but at least I was able to say I saw everything I wanted to see. Feeling rather accomplished, I returned back to my hostel to regroup. There, I managed to rally a couple of my roommates and we all went out for some mussels in Brussels, which as fun as that is to say, I really still don’t see the excitement for mussels. After dinner we went to Délirium Café, a glorious bar with over 2,000 beers to choose from. First off, Belgians take beer very seriously. Not only does Délirium break records for quantity of beers available, but for quality as well. Needless to say, we drank a lot of beer and all had a great time there. All in all, I have to say I was pleasantly surprised with Belgium. I’m ashamed to admit this, but before I landed in Bruxelles, I assumed that it would be just another city to mark off of the bucket list. I had heard great things about the de facto capital of Europe, but I guess I still underestimated the experiences I would have and the friends I would make. As excited as I was the following morning to take a train to my next adventure, it was a bittersweet departure from one of my favorite European cities. 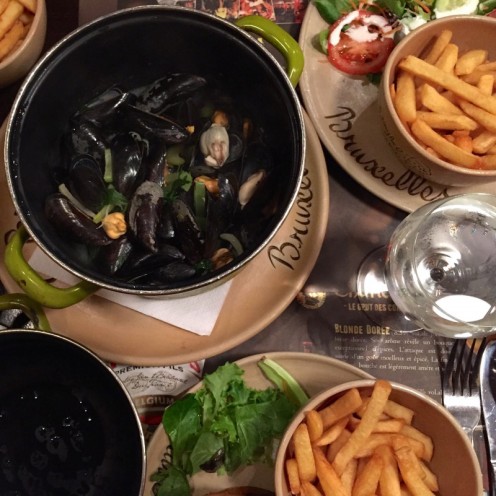