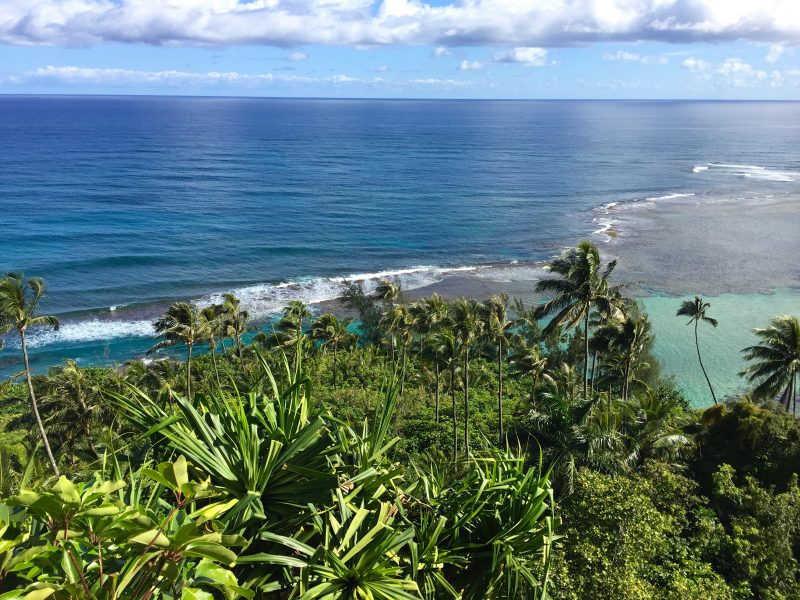 After traveling to Kaua’i for my first time, I knew I had to return to the Hawaiian Islands as soon and as frequently as possible. I joked with my sister-in-law, Halu, that we needed to make it an annual trip… and yet, there we were, nearly exactly a year later, heading back to Kaua’i. The trip was planned just as spontaneously as the year prior. I was selected for a volunteer program in O’ahu where I was able to schedule my own flights. I arranged to be flown a week before the program began so that I could squeeze in a week vacation in Kaua’i. They happily agreed as long as I booked the connecting flight between the two islands. Without hesitation, I called Halu and convinced her to come to Kaua’i with me.

This time around, we decided to do things a little differently. Rather than booking a fancy hotel in Lihue (that was now twice as expensive as the year prior), we opted to book a condominium for the week in Princeville and an Airbnb for a night in Kapa’a. I was honestly shocked at how luxurious the condo was for such an affordable rate. The cliffside complex, Alii Kai, was recently renovated in a pleasant neighborhood with every amenity you could ever want. I could easily see myself living there full-time. On the other hand, the Airbnb was a quirky change, just to mix things up. A large, geodesic dome, was erected in the backyard of a local’s home perfectly perched to overlook the jungle in their backyard. Complete with an outdoor shower, unreal views, and surprisingly strong air conditioning, I was in heaven. It was like luxurious camping (I refused to use the word “glamping”). 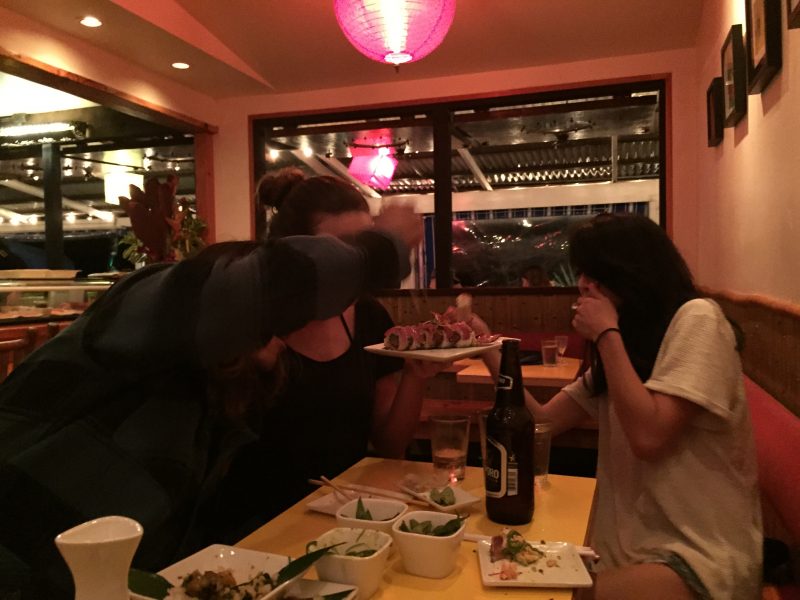 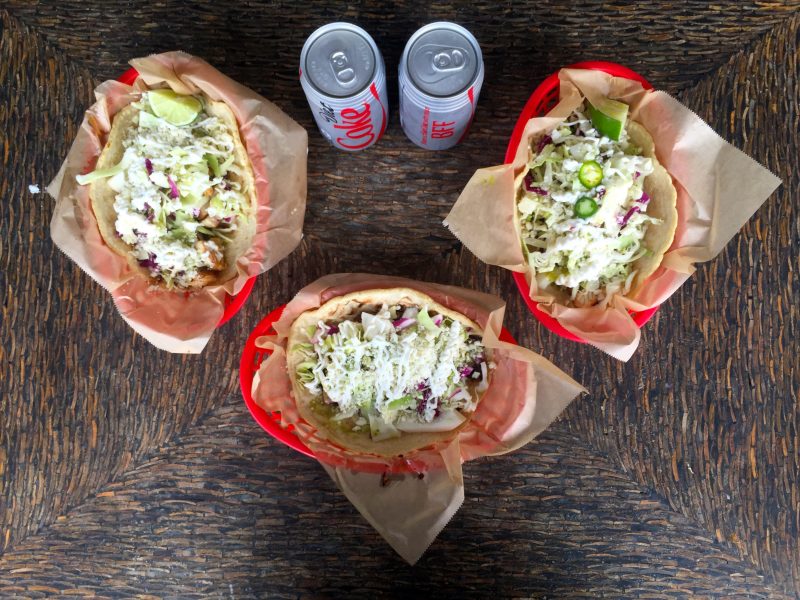 Seeing as how this was our second time in Kaua’i, we didn’t do nearly as many ~touristy~ things. There were a few places that we needed to eat at again, i.e. BarAcuda, Tiki Tacos, TipTop, Tahiti Nui, etc. and a few adventures that we missed our first time around, but for the most part we wanted to hang out and live as local as possible. We spent most of our days at the beach, eating amazing food, and catching up with old friends. Our first afternoon we swam in Queens Bath and watched as the aggressive currents crashed along the rocky walls. It was nice to just let everything soak in rather than rushing from one attraction to the other. Later that night we went to Dolphin Sushi. I was still in my bikini with my hair tossed in a messy bun, but they were so incredibly welcoming that it didn’t really matter how I looked. A friend of ours knew the chefs and they just kept serving us more and more food. One thing I neglected my first time in Kaua’i was not eating enough fish, so I had some catching up to do. Another night, we were brought to a birthday party at a massive ranch style estate in the North Shore near Hanalei. Halu and I awkwardly knew maybe ten of the hundred plus guests, but it was still a lot of fun to see what house parties are like on the island. We just went with the flow and ended up doing some really cool things. 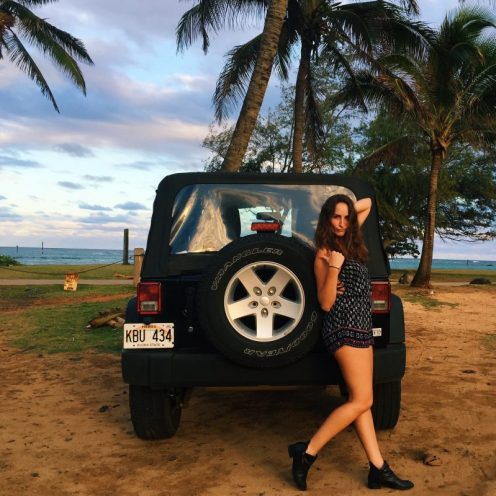 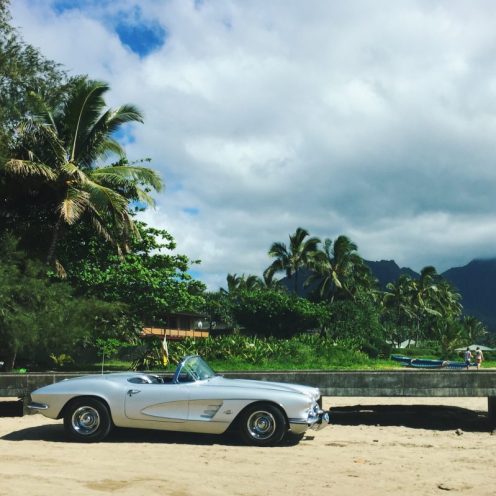 One afternoon, I texted our friend Gavin to see what everyone was up to that night. He told me that his buddy had just caught a big fish and that we should come over for the party. I didn’t really understand what he meant by that, but I told Halu about it and we decided to check it out. We soon found out that his buddy is a fisherman and in Hawaiian tradition, the first catch of the season is given back to the community rather than being sold off. Fortunately for us, this catch wasn’t just any typical catch, it was roughly 250lbs of Yellowfin Tuna. It took four men just to pull the fish onto the boat and it took hours to prepare. By the time we arrived, they were serving sashimi, poké, deep fried and grilled tuna, it was straight off the bone and tossed in tacos – it was served in every way possible. We ate until it hurt and then we kept going. Never in my life have I experienced being fed such high quality, fresh fish, and in endless quantities. The last tradition of the night was to nail the fish tail to a light post. So as the honorary tourists, we were given the task of hammering that tail down. Halu laughed and quickly passed the duty onto me. Getting that slimey tail up on that post took four nails and some aggressive hammering to get it to stay, but it felt good to be a part of the tradition. It was definitely a night I will never forget. 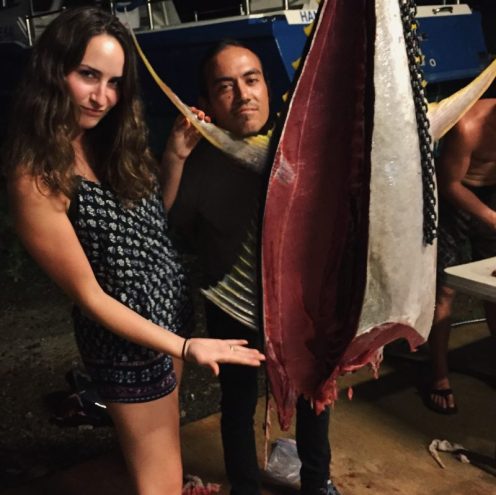 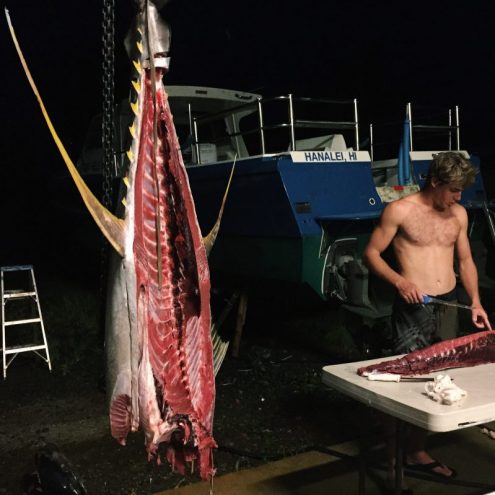 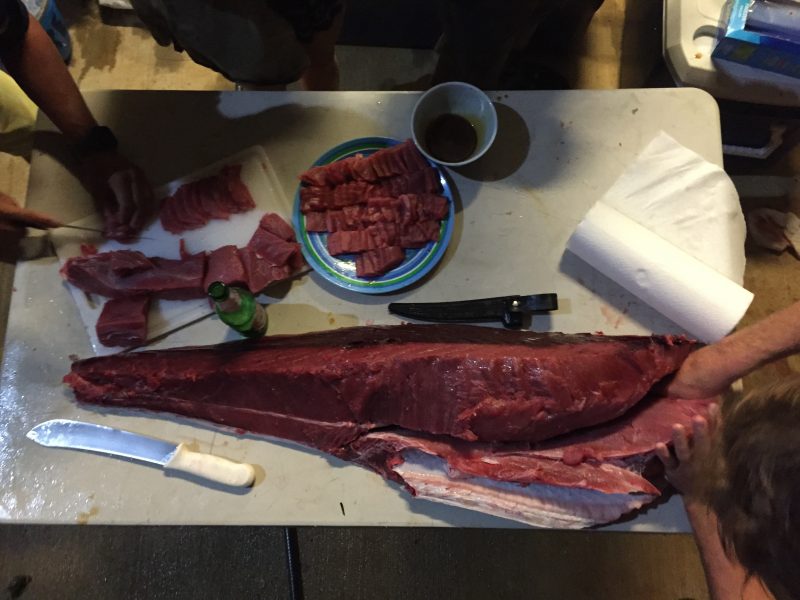 We couldn’t leave Kaua’i without another big barefoot hike. In 2014, we hiked along the Nā Pali Coast from the westside of the island, so when we returned, we decided to hike starting from the northeast side of the island. We hiked along the cliffs for two miles from Hāʻena down to Hanakāpīʻai Beach via the Kalalau Trail. We stopped for a moment to swim in some of the clearest waters I’ve ever seen, before continuing an additional two miles through the jungle to Hanakāpīʻai Falls. We trekked through the mud, bamboo forests, and in the pouring rain to a 300ft waterfall. An unreal sight that even our friends, who were born and raised on the island had never seen before. The water was surprisingly very, very cold, but it was refreshing after the long trek and before the remaining four miles to Hāʻena. Just as we were at the halfway mark, I sliced my toe open on a sharp rock. The remaining few hours were tough, but luckily the cold mud was relatively therapeutic. I suppose that’s what I get for insisting on hiking barefoot. Honestly, I still highly recommend hiking barefoot, it’s worth the clay-stained toes and scars. 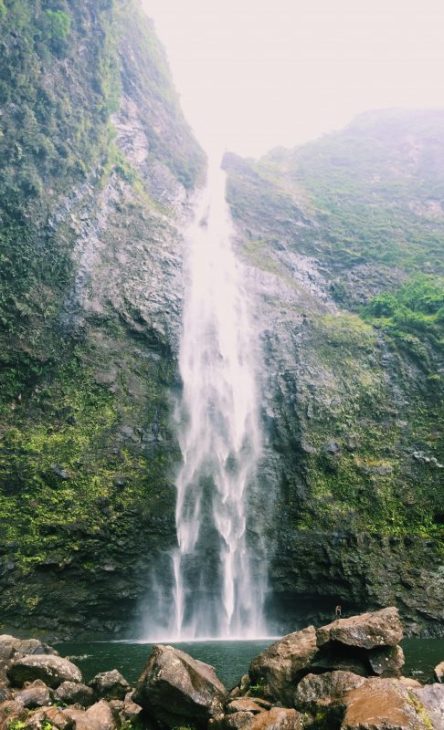 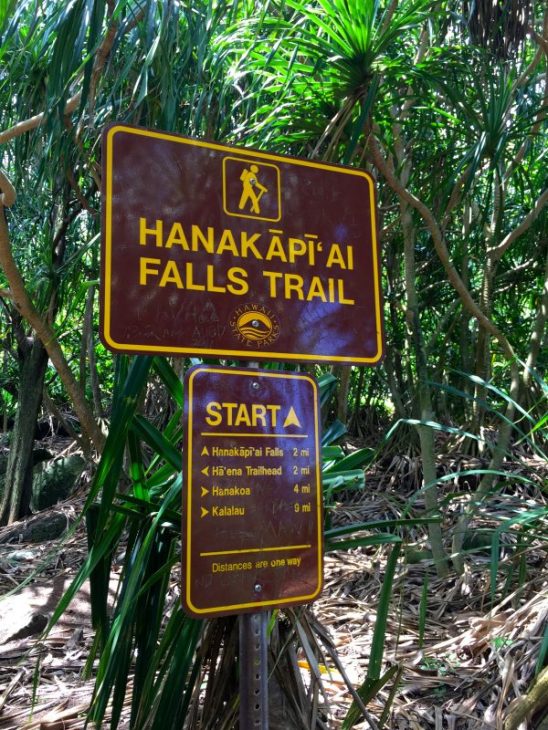 Finally, I had to attempt to learn how to surf, again. Halu laid comfortably on the beach while I did everything in my power not to drown nor fall on coral. I forgot to mention that Gavin is casually a professional surfer, so he’s always happy to get out on the water. We paddled out from the Hanalei Pier, cruised around the cove, and settled in front of the St. Regis in Princeville. Originally I was going to just borrow one of his thousand short boards and test my luck, but instead we decided to ride tandem on the largest long board I have ever seen. Although I wasn’t much help paddling, it was a lot of fun and much easier than my own board. I even managed to stand up a couple times, but mostly just fell, a lot. While we were out in the water waiting for waves, an older gentleman saw me perched on the tip of the board catching my breathe while Gavin paddled behind me. The man smiled and shouted, “I knew there were Mermaids out here.” I blushed and laughed, he made my day because honestly I felt like less of a majestic mermaid and more like a wet rat.

All in all, Halu and I had another perfect week on the island, as always we weren’t quite ready to leave, but at least I was heading off to another island for my next adventure. 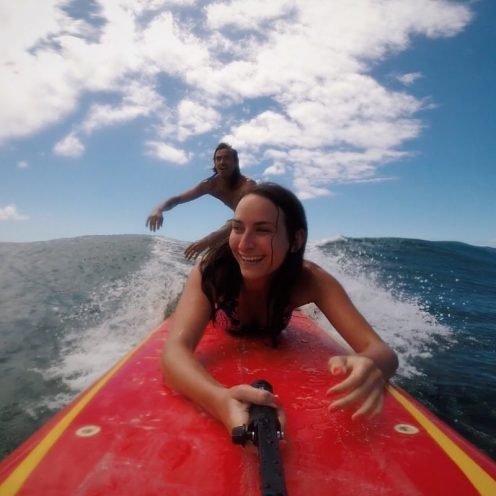 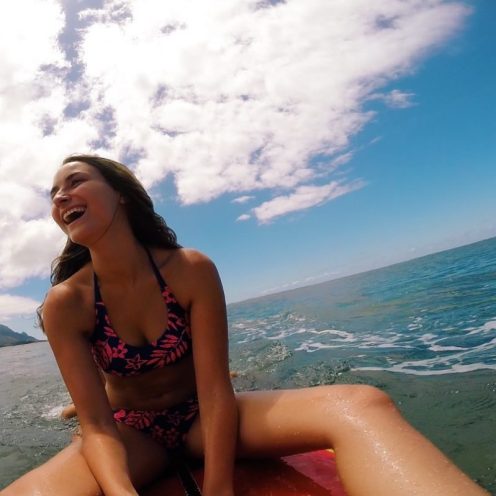 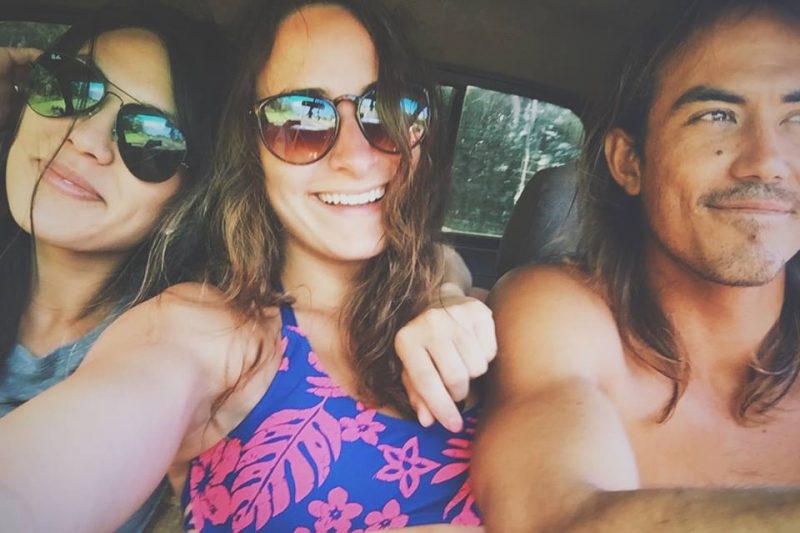